What is a QR Code 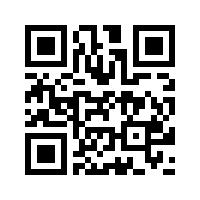 You've probably already seen the black and white bar code looking squares like the one on the right. They are called QR Codes (short for Quick Response code) and you're going to see a whole lot more of them.

Surprisingly, the technology is not new. The QR code was developed by a subsidiary of Toyota back in 1994 in Japan and it's been in use in certain parts of Europe and Asia.

QR codes have many applications in manufacturing, but it's the mobile marketing side of QR codes we are most interested in.

It is reported that 303 million Americans have some sort of mobile device, with more than 63 million owning a smartphone.

Did you know that more than 26% of US households no longer have a land line as we know it and are mobile only?

If you're a small business owner trying to get more traction from the internet in your local area, you should be using QR codes. The great thing is you don't have to spend a lot of money to implement QR codes in your marketing.

Before I tell you how easy it is to get started using a qr code generator, first let me show you an actual QR code example from an ad in my local paper. 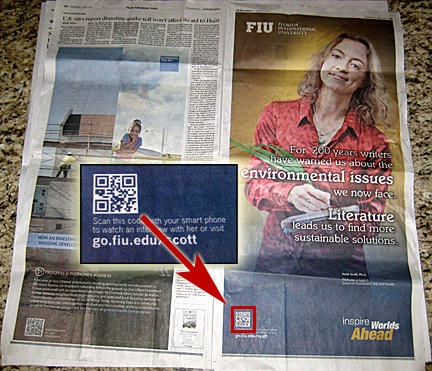 Above is a picture of a full page ad for FIU (Florida International University) appearing in the Miami Herald. On the lower left corner of the ad, they placed a QR code.

When you scan the code (take a picture of it) with the qr code reader on your smart phone, it takes to a YouTube video of the woman in the ad talking about the curriculum and subject matter (see video below.)

I gotta tell ya, when I first scanned that QR code I was impressed. All of the sudden the woman in the full page ad came to life. Talk about taking a two dimensional ad to a whole new level.

This is a FANTASTIC way to increase conversions from print ads -  or any one of your many marketing pieces for that matter. QR codes can direct the user to any URL, whether it be a website, video, or just plain old contact information. You can point a QR code to a Google map or Facebook page. And you can put QR codes on business cards, brochures, T-shirts, newspaper ads, magazine ads, restaurant table tent cards, bus advertising, billboards, coupons, on videos, etc., etc. The possibilities are endless.

How To Get Started.

The great thing about QR Codes is they're easy to get started with. If you have a smart phone download these two QR code reader apps: i-nigma and NeoReader. I personally like NeoReader best, but i-nigma is good too. There are a lot of QR readers out there. Some are better than others. I have an iPhone and these are the two I've found to work best on my iPhone. You can also go to the app store on your iPhone and do a search to download them there. They are both FREE. 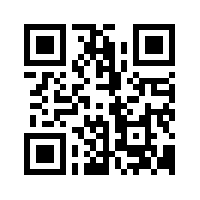 Scan this QR code with your smart phone and it will take you to a great QR code website where you can generate your own QR Codes for FREE.

Once you download and install either one of the two apps, scan the QR code on the right and it will take you to a great QR Code resource so you can create your own - and much more for FREE.

One Response to "What is a QR Code"